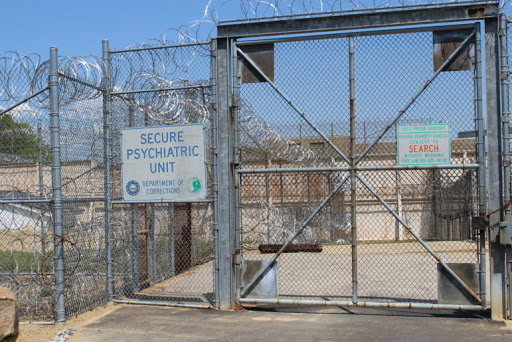 I had the privilege of working on one the the UKs 60 medium secure psychiatric hospitals where patients with both mental illness and a forensic history are detained long term. It’s one of those environments that’s not spoken about very often so I thought I’d answer some of the questions I’m often asked.

How did I feel when I first arrived?

This was actually one of the questions at I was asked in my interview. It’s important to be honest about how strange it feels. There’s a 5.2m fence around the whole site and you have to enter through an air-lock. Every member of staff has keys and if you’re a visitor you have to be escorted everywhere by a member of staff because all doors are locked. In some ways this makes things feel secure and safe but it reminds you of the gravity of the situation you’re entering.

With most jobs you do some induction training while you’re learning on the job. But with this one I did 2 weeks of training including learning how to breakaway and restraint training, before going on the wards. Patients are restrained as a last resort and we learnt techniques that would mean both patients and staff would be kept as safe as possible at all times.

Although there had to be some elements of “hospital” such as a clinic room and nurses station, they tried to make most of the ward area as un-clinical as possible. There were sofas and comfortable arm chairs in the communal areas and every patients had their own room with en-suite. The grounds were nice too with open spaces for each ward, but the fences were a permanent reminder of where you were!

Did you find out what crimes the patients had committed?

It was possible to look up the patients index offence in their notes but I generally didn’t feel it was necessary. In some cases, it was important to know, for example, if a patient could only work with male staff, but on the most part, their index offence had no bearing on their daily life with us.

Seeing the patients as fellow human beings, rather than criminals is important when they rely on you for care. I found out what a few of our patients did but personally, I actually found it easier not to know!

Are the patients dangerous?

Put simply, they can be, but people are in the unit long term and they’re generally stable. When the patients first arrived they’re less predictable and more likely to have higher support needs.

There are generally obvious factors to consider: the triggers for them becoming unwell (unique to each patient) and the fact that the patients are restricted, i.e. they don’t have a say about being in hospital. This can makes things difficult as patients don’t always have a say about what happens and when. Big things like going out are obvious but the smaller things can be just as hard—what’s on the communal TV, for example, has to be by consensus.

Building a rapport and negotiating with the patients is really important and respect works both ways. Ensuring the patients have the freedoms they can have means the ones they can’t have feel less important. I.e. making sure they choose from a menu of foods for each mealtime means they’re less bothered about the fact they can’t choose when to have the meal.

Like anyone with mental illness, it can change over time and patients can go through periods when they’re less stable and need more support. The hospital had Enhanced Support Areas where patients could be cared for in a low stimulus controlled environment with higher ratio of staff—with the hope of avoiding secluding them or using higher doses of medication.

All nurses and HCAs need to hear a handover from the previous shift—how have the patients been? Have there been any incidents? Are there any upcoming events/appointments etc?

On shift it’s about ensuring the patients’ needs are met, this includes meals, personal care and up to 4 medication rounds per day. All patients were encouraged to participate in activities designed to improve their mental wellbeing. This included occupational therapy activities such as exercise, various creative arts, music or cooking—these are run both on and off the ward. Patients also had their own hobbies they could enjoy such as reading or puzzling. Psychiatrists reviewed the patients at least fortnightly at ward round and some of the patients chose to engage in psychological therapy.

Some patients had visitors but not many. It was incredible to see the dedication some family members maintained but other patients had lost touch or had chosen not to receive visitors.

What did I think about patients being in hospital rather than prison?

To be honest, I was just glad it wasn’t me making the decisions. Some patient were there because they were too unwell to face trial while others were there having become unwell while in prison. All patients were sectioned under the mental health act which means they are legally detained and cannot leave unless it is agreed by their Responsible Clinician. Although it would come up in conversation, as someone in the caring profession, it wasn’t up to me to be judge and/or jury for the crimes people had committed, I was there to care for people who were unwell so I would try my best to make their lives as comfortable as possible.

Were you ever scared?

I worked with patients who were physically frail and I was involved in incidents where the patients were unwell, at these times I didn’t feel at risk. I heard about incidents (that I wasn’t involved in) where a colleague’s safety was put at risk and then it would hit home, the environment that I was working in could become dangerous at any time.

The training we received yearly ensured the environment was as safe as possible and we were reminded repeatedly about the importance of multiple safety procedures. Being cut off from the outside world isn’t taken lightly by anyone.

Would you recommend the job?

For anyone with a passion for care, with a level head and an ability to bring a non-judgmental approach, I’d recommend it as a very rewarding atmosphere. You can really get to know the patients and their support needs. It can be gruelling both physically and mentally but provided you have a good employer and adequate support it can be an incredible job.